Jugger looks weird. Two teams challenge each other in a struggle for a dog's skull. And they fight with long staffs, clubs and even a chain! What are they doing?
This is Jugger.


Shortly and inaccurately put, Jugger is what you get if you mix Rugby, fencing, built-in fair play and good fibes.

More accurately put, Jugger is a sport where two teams of five challenge each other over a ball that is of a weird shaped. Four players in each team carry spars, whith which they try to tag their opponents. Anyone tagged has to get on one knee and take an outtime of around 8 seconds.
The fifth player, called "qwik", is the only one who can score a point by slamming the ball into the goal.
As a result, the four "guarding" players try to clear a path for their qwik, and, at the same time, keep an eye on the opposing qwik: If he chases for the team's goal, than it is high time to tag her, to avoid receiving a goal.
It is a speedy gameplay, very sportive, which involves lots of sprinting, fencing, communication among the teammates, evaluating attack opportunities and timing retreat, quick decisions. The game is happening everywhere at once, not just there where the ball is.
Last not least, the Jugger community is quite a unique, large international phenomenon. We love to BBQ after a day's hard tournament matches, be friends with our hardest opponents on the field, and do the finest thing that sport can achieve: Local and international exchange of thoughts and having an excellent time.

But why does Jugger look as it does? Why that strange ball, also called "skull"?
The roots of this sport are quite as unique as the sport itself.

Originally, Jugger has been invented by the director/writer of the movie "Blood of Heroes", Dabid Webb Peoples, who told me about his intentions during my research for the first Jugger book ever written . In the movie, it was a brutal, post-apocalyptic sport, where the players fight for food and money: screw nuts (sex only seems to be the usual after-show party element, not, as it is often said, the goal of The Game itself).

The movie becomes a sport

Shortly after the movie had been released, Jugger was transformed into a real, playable sport in two places of Germany independently; these two cradles were Berlin, perfect with its post-apocalyptic look and fee during the early years after the fall of the Berlin wall; and a group of live Action Role Players, the Dilletanten, of Luebeck, Heidelberg, Hamburg and other cities. That other branch staged the first ever tournament in Hamburg in 1995. It was at around this time that Berlin and Hamburg learned of each other. A bit later, Jugger started to become inceasingly popular all over Germany. And so the German Jugger community was born. Over the years, new Jugger groups came up, partly inspired by the movie and documentaries about the active Juggers, partly after visiting the German Jugger site in the internet; some have been formed by juggers who moved to other towns. The USA transformed it as well, but with quite a different character, including it into their Amtgard groups. 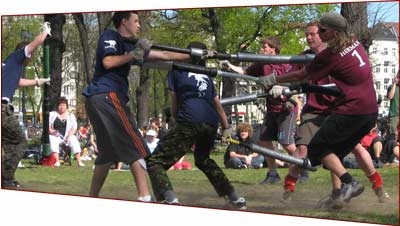 Meanwhile, Jugger has become an official sport, with hundets of teams and dozends of tournaments nationwide. But some Australians enjoy playing it since 2000 as well, and even some guys in Denmark, Spain and Costa Rica. We also do have rules discussions at length, of course - see below. Right now, Jugger seems to go off like hell. The first German Open were held at Berlin in 2008, with Australia and Ireland playing along with 28 German teams.And the first book on Jugger has been translated and is available in English now: Jugger. A post-apocalyptic sport for all occasions.

Fighting for a dog's skull as a regular sport? Sure! The skull is made of a thick cellfoam, the clubs are well padded, the chain is made of plastic with a softball at one end. You don't hit your opponent hard, but try to touch him quickly. If You manage to touch him (except on the head), than he has to get down and wait for some seconds, before he can rejoin the game.
Two runners, so-called Qwiks (sic), do not carry padded clubs or staffs. They are the only ones who may carry the dog's skull and place it into the goal of the other team, which scores a point.
Quite unique is the combination of two elements, which are usually separate: That of a team sport like football, and that of duel sport like fencing or Kendo: It requires a fast and unusual teamplay, moves not unlike American Football or Rugby, and the mastering of the individual club/staff/chain. And it makes a hell of a lot of fun!


Now, about the way Jugger is played in Germany and most other countries.

TEAM
We have teams of 5 players - four enforcers who we call "Pompfer", and one Qwik commonly known as "Läufer" (="runner").

POMPFEN: NO WEAPONS
Our spars are no "weapons", for good reason. neither are tehy copies of weapons, nor are they created to harm anyone (on teh contrary). They may have gotten the name "Pompfen" by the sound they make at impact.
In Germany as well as many other Jugger countries, we have quite standartized Pompfen. These are: The Staff, the Q-Tip (a double-ended two-meter staff), the Long Sword (Langpompfe), all of them two-handed; Shield and Short Sword (Kurzpompfe); and the "single-line" Chain with a big softball at the end, of course.
All Pompfen except the chain are made of a foam material which is usually used to protect household piping from freezing. So, they all do have a round diameter; blades are forbidden. Some make their Pompfen out of stripes of thermal mats; they also are round.

We don't use stakes as done in Australia in the past. Instead, there are hollow-pointed foam pyramids or just circles. You stick the skull into the pyramid or put it in the circle - and it doesn't "hop away" - you happy one earn a point.

SKULL
The German skull is a foam replica of a dog's skull. Some call it "Jugg", others "Schädel" (="skull"). Since we don't use poles to stick skulls on, some do shape their skull quite ... realistic. Holes and spikes are avoided for safety reasons, however.

STONES
We usually count stones by hitting a drum or, in some cases, throwing stones against a metal plate. A player hit by a Pompfe gets down for 5, if hit by a chain for 8 stones.
A game lasts for 200 stones, finals 300 stones. Today, games are often played in sets, as "best of three".

CUP/TROPHY
Each town holding a tournament usually offers a cup, or trophy, for the winner. Every trophy has a different shape: There is a painted, pitch-shaped shield with little Pompfen arranged on top of it and an artificial skull in the center, some kind of a huge wheel, a rugged flag, and others. The trophy is handed from one winning team to the next, each notig their name on it.

JUGGER COUNCIL, LEAGUE AND RULES
There is no acknowledged national Jugger association in Germany. There is a council of rule wardens, though, who take care of the votings on rule changes which take place about once a year or every two years. They have no authority in changing rules on their own behalf, though.
Also, there are some leagues, like the Jugger Liga, the OWL and others, which may have individual restrictions and ranking systems. The ranking system at the JTR is a subjective impression, set by the coder of the website jugger.org, and widely accepted; but still subjective.
In the past, there have been bigger local variations in rules. Those have mostly been straightened out, and the German sports Jugger community almost exclusively follows the German JUgger rules as listed at jugger.org.
A BOOK ON JUGGER
So, the first book I published about Jugger as a sport, with kind informal support of the director and informations from many of our teams (and the Australians), is not meant to be (and cannot be) a "standardization" of The Game. Instead, it is designed as a paedagogically enriched guideline for schools and youth projects who are interested in building their own team from scratch; this is because of the publisher. Originally it was written to compile and display the current state of Jugger here, and the history of the sport. It is available in English as well, as a free PDF download: Jugger. A post-apocalyptic sport for all occasions 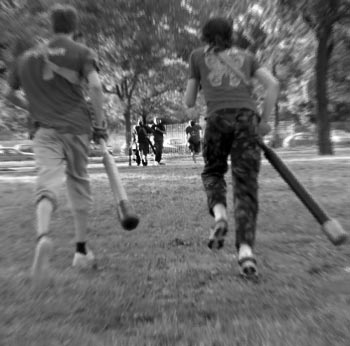